My War Against "Cool"

But you are a chosen race, a royal priesthood, a holy nation, God's own people, that you may declare the wonderful deeds of him who called you out of darkness into his marvelous light.(1 Peter 2:9 RSV)

But you are a chosen people, a royal priesthood, a holy nation, a people belonging to God, that you may declare the praises of him who called you out of darkness into his wonderful light.

If we look at the inverse, we know that if we don't belong to Him, we are in darkness. We know from this verse that the result of being called out of the darkness is a joyous declaration of praising our Heavenly Father for His goodness. This type of declaration can often be downplayed in order to be seen as "cool." 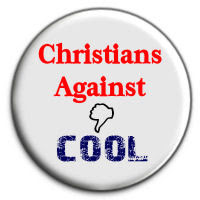 If you haven't guessed already, I'm not a big fan of cool. I may say "Cool!" or "Awesome!" to articulate my agreeable state of being at the moment, but I actually deplore the idea that we Christians should be "cool" in order to attract unbelievers to the saving knowledge of Jesus Christ. I don't think salvation falls anywhere near the concept of "cool." In fact, salvation is so far above it that the term cannot even be seriously considered according to God's revelation.

I'll never forget my reaction when I realized the non-denominational church I was attending planned on transforming their service into a "seeker-sensitive" one. Immediately, I had questions. What did that mean? Is it even Biblical to be "sensitive" when preaching salvation to the lost? How did this approach line up with the Biblical definition of church?

When I started to understand what "seeker-sensitive" meant, I experienced a mixture of sadness, anger, and irritation. I took offense because I didn't believe it was the right path for the Christian church and I still don't.

Some Christians like to point out that since Jesus reached out to tax collectors and prostitutes, He was being "cool." They define this as being "seeker-sensitive." I could not disagree more. Jesus Christ had a life-changing message and He was bringing this message to whomever would listen. The fact that He ate a few meals with such folk doesn't mean the same thing as a church employing large-screen monitors for entertainment, a professional worship team, and a charismatic pastor who preaches from the latest pop-psychology book.

When one becomes so focused on "relating" to the world, it doesn't take long before he or she is conformed to the world; not transforming it. Some Catholics would quickly say this is what happened to the Catholic church after Vatican II.

When I was attending the non-denominational churches, I saw a great deal of worldly behavior. Young women, especially, would often wear immodest clothing. And why not? No one was challenging them to consider themselves set apart, as God's own people who have a radical calling to the world. This calling is in direct opposition to the self-centered actions of a world who does not know Christ. When I can't tell the difference between "Christian" heavy metal and the world's, I think there's a problem. Why are we so afraid to be different?

When we are so attached to what others think of us, whether they see us as being "cool" or not, our witness is severely hampered. If we are trying too hard to be heard by the world but the world is simply hearing the same message but with a different tone, will they really listen? Does the message touch them in the place God wants to touch them?

This is part of the reason why I feel so strongly about issues such as modesty. I believe that when a woman devotes her life to God through Jesus Christ and by the power of the Holy Spirit, she should look different and act different. Her clothing is no longer a vehicle to get noticed or validated as being desirable. Her heart is now being clothed in quite a different way and it is reflected in her appearance.

We are called to be God's people and this brings with it a serious obligation. Will we forever be caught up in this mad pursuit to be "cool" or will we accept that others may always think of us as being just a little strange because we're so in love with our Lord?

I write such things to remind myself to pursue God at all costs. For me, this is in direct proportion to how deeply I have died to a desire for validation from the world. My Lord's opinion, truly, should outweigh the highest praise from the world. Amen and amen.
by Mary Rose at 1:19 PM