What I Love About Catholicism: Spiritual Alignment 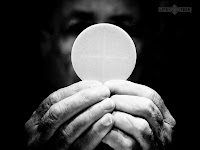 I have mentioned that the Catholic church has what I call, backbone. Maybe it's because I woke up this morning with a backache, most likely due to twisting it during the night. But I was reminded of a few thoughts I had last week which had to do with how Catholicism focuses on what is basic and of utmost importance.

Our backbones, when aligned properly, allows the rest of our body to function properly. What especially is affected is our walk, our movement - progression from one point to the next.

When someone's backbone is deteriorated, as is the case with a good family friend, then you can forget about walking long distances. I also have a cousin who has a rare degenerative bone disease. She is confined to a wheelchair and can only stand for a very short period of time.

When you have a strong backbone, you can accomplish many great feats. I am in constant amazement of what the human body is capable of doing each time I watch the Olympics. A high diver leaps into the air, rotating hips and torso, bending and reaching with precision until finally executing a perfect flip, entering the water with barely a splash.

Or watch gymnastics, speed skating, pole vaulting, or basketball. Watch any sport and you'll see how amazing the body can twist, bend, and contort. Under the disciplined efforts of the owner, it achieves great success.

The Catholic church's backbone is the Eucharist. It is the source and summit of the life and the mission of the church. (If you've not read the results of the 2004 General Assembly of the Bishops on the topic of the Eucharist, you're in for a treat.) From the preface of the General Secretary:

Today, the Church is undeniably experiencing a certain “Eucharistic need” based not on an incertitude regarding the presentation of doctrine—as occurred in the period of the Second Vatican Council—but on a Eucharistic practice which calls for a renewed attitude of love that is expressed in acts of faith in the One who is present for those continuing to search for him in our world: “Master, where do you live?”.

Whomp! There it is! Three cheers for Pope John Paul II. He knew where the focus should be and it wasn't on whether to include brass instruments in worship. We needed to be reminded (always, in my mind) that the focus of the Mass is the Eucharist.

When the backbone is aligned, everything else falls in place.

One of my recent "light bulb" moments came when I remembered how it worked with my non-denominational church. The focus wasn't on Communion because rarely was Communion celebrated. Instead, the focus was on the preaching and having a kickin' worship team. Now I love music, and having a great worship team is fine and dandy - but if the focus is on the team, the church service is out of alignment.

What often happened was that the preaching and the worship competed against each other. The worship team would have many occasions where they felt "led by the Lord" to keep playing well past the allotted time for worship. The preacher would then try to "go with the flow" but itched to do what he felt called to do. Sometimes I witnessed the preacher getting on the platform with the worship team to start singing along; which I thought was presumptuous and seemed to validate the preacher's need to be noticed.

Occasionally, the preacher would cut the worship time, causing slight rifts in the worship team. Either way, there was a constant tension between the two.

This tension does not exist within the Mass. Yes, there may be priests who think people are attending to hear a glorious homily but I bet they're in the minority. Priests, from all their training, know the pinnacle of the Mass is when he offers up the Body and Blood of our Savior, Jesus Christ. It is when we remember who He is and what He has done for us. When we focus on the Ultimate Sacrifice of both Father and Son, we understand more deeply our Father's desire to reach the world with His amazing love.

Get that, and you'll be spiritually aligned. And if the universal Catholic church gets that, it will be able to walk for miles and miles, and not be weary.
by Mary Rose at 9:22 AM

Email ThisBlogThis!Share to TwitterShare to FacebookShare to Pinterest
Labels: Holy Eucharist, What I Love About Catholicism