Catholicism As a Humvee 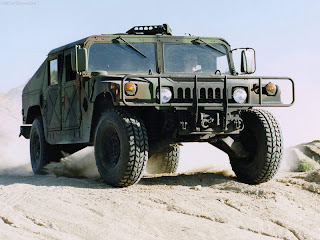 My father has been a GM man for many years. The only non-GM car I can remember was a light blue Volkswagen Beetle that he had in his twenties, amazingly large enough to carry his huge stand-up bass when he played in bands. I still have a fondness for light blue Volkswagen Beetles and the memories of it carrying at one time, the "Big Daddy Bass." (as I named the behemoth when I was around four-years old.)

But Volkswagen Beetles aren't the best cars for weathering a rear-end accident, as my parents discovered. Soon after, my father started to go for the larger cars for his new little family. Buicks and Cadillacs were the preferred models when it came to long-distance traveling for his sales calls and carting us around town. Later, when I was a teenager, I'd point out "cute little sub-compact cars" and my father's response was always the same: "No protection. You get hit in one of those and it's over."

My dad is a pretty smart guy in a lot of ways. Why take chances with your life if you can save a little more money and get a car that is safer?

Which brings me to the image of Catholicism as a Humvee. Actually, there are other images I have when I think of the Catholic church. Tank. Battleship. Basically, a huge, protective, moveable object that can repel an onslaught of attack.

I don't want to offend any of my non-Catholic readers, but I have to say that for me - after years of being involved in non-Catholic churches, I felt as though I was frequently subject to the winds of change. Those "winds" were, in my eyes, too often the "whims" of men. There was no rhyme or reason, only one leader's ego that would usually initiate a particular direction. His vision would either be agreed upon by a small group of leaders or challenged. In time, much like in a game of football, it would be determined that this "strategy" wasn't working, that perhaps the leader didn't hear from God clearly enough the first time, and so another "change" was needed.

There was always the "bigger and better" approaches to church life. What was done one year could always be improved upon, or so they said. And because improvement is worshiped as often as a false idol, more changes would be made so that there was always something "new" installed.

I don't think I'm the only one who has noticed that the Catholic Church doesn't change easily and in fact, moves v e r y, v..e..r..y.., s...l...o...w. I might chalk it up to growing older, but to me, slow feels pretty good right now. I've been on the Wild Carousel of Christianity and I'm dizzy. For what it's worth, I did love the ride when I was younger.

There is security in tradition and we as God's children, were created to need this security. We get pretty skittish when we're faced with the unknown or the new. Sometimes new is good. Sometimes it's the devil whispering in our ear, did God really say...? God created the Law for a reason. The Law kept Israel on the right path. Look what happened when they'd wander off, distracted by some shiny idol of a godless nation who surrounded them.

I am finding so much peace and security in our Feast Days, which are celebrated each year on the same date. My soul finds rest in the liturgy, which follows its own rhythm, established over the centuries. I like the fact that Rome has taken a long time to adapt to the Internet and it's touching to find out that there are real nuns answering the telephone at the Vatican.

I believe that the Church Universal is about to enter a period that will be similar to our forefathers and foremothers of the church. I believe we're going to see more persecution, more attacks on individuals and businesses. As I see it, I don't want to be flying around, laughing with delight on some carousel. I want to be inside a Humvee, navigating the rocky roads carefully while being able to carefully maneuver through nasty weather. Humvees are built to take such abuse.

This post is very true, but what I like best about it is the top where you have "Catholicism as a Humvee" right over a picture of said vehicle. For some reason this cracks me up. I feel I should have a poster of it on my wall: "Catholicism" in bold on top, and the Humvee picture beneath, to intimidate and confuse all who enter my home. :)