Blessed By a New Priest: How Cool Is That?

I have to share my excitement here because really, I don't have many fellow Catholics in my life who would relate. I have my father, who lives in another city two hours away, but at least I can talk to him about Catholicism. And I'm starting to make some new friends at my parish, but other than that, this blog is it.

My parish has several weekly Extraordinary Form Masses and the one I attend regularly is Wednesday mornings at 9:00 AM. The priest of this parish, Fr. L, also teaches a weekly Bible study on Tuesday nights. This past Tuesday, I was able to finally attend the study, which was really good. (It was the tail-end of a series on grace and salvation.) During the study, Fr. L happened to mention he would need to take one call on his cell phone from a newly ordained priest who was coming in for a visit. Fr. L mentioned that this new priest considered our parish his "second home."

So during the class, he received the call. He asked if the priest would be "willing to take the 9 AM Mass" because it would help prevent Fr. L from binating. (Saying two Masses in one day) I thought, "Hmmm. We may have another priest tomorrow morning..."

So as Mass started yesterday morning, I realized we did indeed have another priest. His voice was deep and clear as he recited the Latin prayers and said with obvious devotion. After the celebration, he announced to us that if we wanted to receive a blessing from him, to approach the communion rail. Almost every single person came up. I knelt at the end, right in front of the statue of the Virgin Mary.

I want to mention that yesterday's weather was very turbulent! We had heavy thunderstorms off and on all day. In fact, I was tempted yesterday morning not to attend Mass but now I'm so glad I did!

The priest came out after changing from his vestments and started to bless everyone. It wasn't until he came nearer to my area that I realized he was praying in Latin! I also noticed he was carrying a stack of holy cards. Finally, he came to me and laid hands upon my head and prayed for me. After I made the sign of the cross, he softly said, "You may kiss my hands if you'd like" and held out his hands. I quickly kissed them and looked up at him with a big smile while saying, "Thank you, Father." (Note: Kissing the hands of a priest is an old custom. It is meant to venerate the hands of the one who offers up the consecrated host. It is an expression of faith and love for Jesus, whom the priest represents.) I noticed how young he looked and was very blessed to see such a young man answer the call to this precious vocation. He then gave me a holy card.

When I got into the car, I took a closer look at the card. I was elated to realize that he was Fr. Jonathan Romanoski, one of the four priests who had just been ordained by Cardinal Hoyos into the Priestly Fraternity of St. Peter this past Friday, May 30, in Lincoln, Nebraska! (FSSP) How cool is that?!! Here he is with an arrow pointing him out: 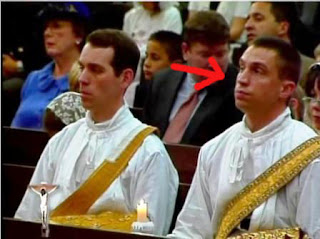 I'm including a scanned image of the card. I was so excited and sent up another prayer for this precious priest, that God would direct him in all ways and fill him to overflowing with His love. 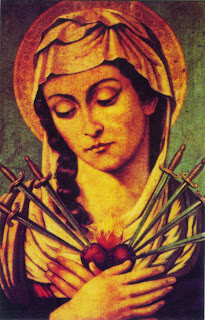 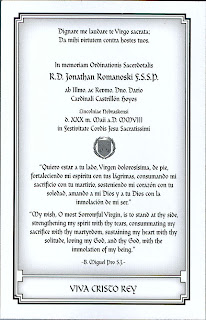 I just thought it was the coolest thing to have a priest who was newly ordained to not only celebrate a Latin Low Mass, but to be blessed by him. Please keep Fr. Romanoski and his fellow priests, Fr. Jared McCambridge, Fr. Dennis Gordon, Fr. Justin Nolan, all of the FSSP, in your prayers. They are embarking upon a very exciting journey and one I pray will bear much fruit for the Kingdom of God!
by Mary Rose at 9:21 AM

What a beautiful card!

You are very lucky! God bless these young men.

That's an awesome story!!! Clearly you go to a fine parish, too. :)

What a blessing! That image of the Blessed Mother is beautiful.

Fr. R is cool. I took him to breakfast a few months ago.

Hilaire, that is awesome. Everytime I see a young man give his life to God in this way, I thank God. I spoke with my parish priest today and found out Fr. R will be visiting again. I hope I can attend another Mass where he is the celebrant. I'm curious as to which parish he will be assigned.