What I Love About Catholicism: Church Authority 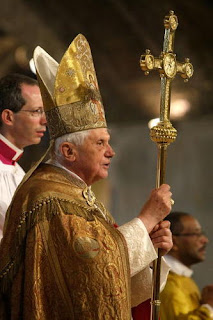 In George Weigel's book,The Courage to be Catholic: Crisis, Reform, and the Future of the Church, he very succinctly describes what contributed to the breakdown of the spiritual formation of our priests which led to the sexual abuse crisis that broke in 2002.

For over thirty years, there was a worldliness that crept into our seminaries. Moral relativism replaced the hierarchical structure that had enabled the Roman Catholic church to stand strong for over two millennia. Instead of standing strong for Biblical truths, many theologians blurred the distinction between homosexual orientation and homosexual acts. Many of the ordained priests during that time were taught to publicly support Catholic teaching on homosexuality but yet privately question it. No wonder we had such a mess.

I am reminded of a truth I learned at an early age. The teachers who were, in my eyes, "mean" - were seen as such because they had high standards. Many students may have complained about "Mr. Smith" being mean, but it was in fact because Mr. Smith expected a great deal from his students. He knew they were capable of doing more and would frequently tell them this.

When you think about the people who have made the most impact in your life, who comes to mind? The teacher who sought to "understand" you and make allowances for your poor performance? Or was it the teacher who refused mediocrity and pushed you to try again because he knew you could do better?

I now look at the church with this perspective. I know that Pope Benedict was at first called "The Rottweiler." But I think this was from those who knew that Papa was not a pushover. In fact, Pope Benedict is lovingly corralling his flock toward a deeper understanding of the inheritance of their faith. I see him just like a diligent Shepherd who will rush to rescue a sheep who is in danger of falling off a cliff or heading in the wrong direction.

I suspect that many Catholics are unaware how very blessed they are to have the church that was instituted by Christ. After the reformation, there was an explosion of protest and dissent. From that explosion came much confusion and chaos.

Authority is a loving gift from God. As God has created laws and commandments to help us become holy, so He created the hierarchy of the church to help us stay on the right path. I think Pope Benedict XVI is the right man for the right time. The enemy of our souls is continually at war with us, to make us believe there is room for "dialogue." But when you get right down to it, there is no dialogue with it comes to obedience. We either trust in God, or we don't. The devil's favorite color is gray.

God has put into place the headship of man. From that, we have the wives and children who are to submit to the husband and father. Even if that father may be wrong some of the time (and of course he will be, because he is in the midst of being sanctified himself), does that excuse the children from obeying him? No. Would God penalize the children from obeying their father when their father is in fact, in error? No. God would hold the father accountable for leading his children astray, just as Jesus points out:

"Whoever causes one of these little ones who believe in me to sin, it would be better for him if a great millstone were hung round his neck and he were thrown into the sea." - Matt. 9:42 (RSV)

More than ever, we need to pray for those who are in authority over us. Pray for the Pope and pray for the Bishops and priests, for our diocese - for all who have authority over the church. Pray for their souls, that they would seek humbly to obey God and follow Christ at all costs. Pray that our Blessed Virgin Mary would come to our aid and intercede for us.

Just as a train needs the rails to get a train to its destination, so we too need the authority of the church. Otherwise, we'd just be wandering in the desert for another forty years.
by Mary Rose at 8:15 AM