Why Catholic Identity Is Important 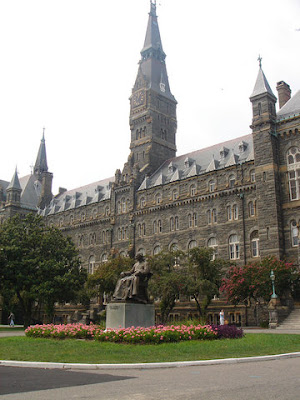 It was with great sadness that I read this:

Washington, D.C., June 5, 2008 (LifeSiteNews.com) - Georgetown University, the oldest Catholic University in the U. S., has hired lesbian Shiva Subbaraman to act as director for its new Homosexual Campus centre that is to be opened in the fall.

Subbaraman was formerly the associate director of a homosexual equity office at the University of Maryland campus in College Park. After the school threatened to cut funding for the office, Subbaraman started looking for a new job.

The pro-homosexual newspaper, The Washing Blade, reports that Georgetown decided to start the LGBT Equity office after two "anti-gay incidents" occurred on campus. In the first case a student was arrested and accused of assaulting a homosexual student and shouting anti-homosexual slurs at him. The case, however, was dropped due to lack of evidence. In the second incident campus police prevented a group of homosexuals from presenting a petition for the LGBT resource center to the university president. According to the Blade, the police said they were restricting access to the building due to the fact that there was a special event going on inside.

Georgetown University, which is fully funding the new homosexual campus centre, including paying for two full time staff members, has been known to proclaim itself a Catholic institution while going out of its way to support things dramatically opposed to Catholic teaching, including abortion, homosexuality and certain bioethical issues.

The latest news about the founding of the LGBT resource center comes as little surprise to those who have been following Georgetown's movement away from its Catholic identity.

The article also pointed out a horrible portion of high school literature that their High School Bioethics Curriculum Project uses in its program. It brings up a situation where a baby, who needed long-term medical care, only lived 2 1/2 years and the medical costs totaled half a million dollars. (And why can't they just say $500,000? Oh, yes. 'Half a million' sounds so much more extreme...)

The literature posed this question: "Do you think this is an appropriate use of the money? Do you think Baby K's mother's religious beliefs should trump issues of fair distribution of resources?"

As long as Georgetown University is throwing sick babies under the bus, they may as well strip themselves entirely of what little Catholic identity is left and declare themselves a communist college.

Because the Bible has made it clear that homosexuality is a sin, I would think a Catholic university (or any Catholic group) would want to make sure a person was confronted lovingly with the truth. I do stress lovingly because I've seen too many Christians become harshly judgemental when dealing with this issue. God is a loving God who desires all to have relationship with Him. He does, however, judge our sin. If we can't admit that maybe our way is the wrong way, then it only makes it more difficult for the truth to enter our hearts.

This bit of news from Georgetown saddens me because I see it as the church capitulating to society. We are to stand strong for the truth and the truth is - sexuality is a very important part of our identity; but it is not the only part of it. I've met many gays and they are far from being "gay" or happy. They are wounded on many levels. It is my prayer that the Catholic church will stand more strongly in this area and not justify immorality or euthanasia.

And to think this happened after Pope Benedict XVI visited the United States.

Georgetown U definitely needs our prayers.
by Mary Rose at 3:12 PM

I'd love to offer this quote from our Catechism of the Catholic Church article 2357-2359 (emphasis mine):


2357 Homosexuality refers to relations between men or between women who experience an exclusive or predominant sexual attraction toward persons of the same sex. It has taken a great variety of forms through the centuries and in different cultures. Its psychological genesis remains largely unexplained. Basing itself on Sacred Scripture, which presents homosexual acts as acts of grave depravity,141 tradition has always declared that "homosexual acts are intrinsically disordered."142 They are contrary to the natural law. They close the sexual act to the gift of life. They do not proceed from a genuine affective and sexual complementarity. Under no circumstances can they be approved.

2358 The number of men and women who have deep-seated homosexual tendencies is not negligible. This inclination, which is objectively disordered, constitutes for most of them a trial. They must be accepted with respect, compassion, and sensitivity. Every sign of unjust discrimination in their regard should be avoided. These persons are called to fulfill God's will in their lives and, if they are Christians, to unite to the sacrifice of the Lord's Cross the difficulties they may encounter from their condition.

2359 Homosexual persons are called to chastity. By the virtues of self-mastery that teach them inner freedom, at times by the support of disinterested friendship, by prayer and sacramental grace, they can and should gradually and resolutely approach Christian perfection.

In one sentence: God loves the sinner, yet hates the sin itself.

Tune, you know it. This is especially a slap in the face of the Vatican after they reaffirmed that homosexuals are not permitted in seminaries.

So after that announcement, you'd think Georgetown U would, if anything, have a ministry that helped gays lead a chaste life. They could be reminded that we all have our crosses to bear. But that perspective is rarely taught anymore.

Look what has happened in Canada. To preach the Bible and its judgement on homosexuality is now a "hate crime." The pastors there can't do it or they get in trouble with the government.

This is where the gay activists hope to take the U.S.

When I was attending non-Catholic churches and seeing other mainline denominations fall to the pressure to ordain gays actively living the lifestyle, I never knew that someday I'd look at the Catholic church as being the lone voice in the wilderness.

But places like Georgetown U aren't paying any attention.

I agree with all comments about the 'sin' of the homosexual act. However, I'm sure the 'homosexual center' at Georgetown U is NOT a place to promote the sexual act among lesbian and gays. In accordance to the CCC, not only people with homosexual tendencies are called to chastity - married, single, religious, etc. We all are! Furthermore, those who are not in a married relationship are called to CELIBACY! This would mean all heterosexual couples as well as homosexual.
Regarding the 'discussion' of admitting gays into the seminary, many seminarians and priests have come out 'of the closet' because they are living a CELIBATE life. Sexual tendencies of any sort are a human factor - how we act upon these tendencies is the issue. So why target homosexuals?

casosiwi, this entry regarded the development at Georgetown University where a known lesbian was hired in a position for their new LGBTQ Center.

Wonder what the "Q" stands for?

So I disagree with your assumption that Georgetown isn't going to promote homosexuality. As far as the Catholic doctrine goes, there is only one kind of group that should minister to the lesbian, gay, bi-sexual, transexual, or "queer and questioning." And that group should give everyone a copy of the Catechism, a copy of the Bible, and start talking and praying.

I'm not "targeting" homosexuals. I just found it disheartening to say the least that the oldest Catholic university has fallen to the pressures of society. I don't buy the premise that anyone who doesn't agree with someone living a homosexual lifestyle is a "hater." If anything, Christians are showing the most love of all by telling someone their hair is on fire.

Chastity is certainly the choice not only for singles, but for married people, too. Priests and nuns are called to live a life of celibacy.

The problem with having a tendency vs. acting upon it is that for priests - they are living and engaging in an all-male environment. Do you really think that's the best place for someone struggling with such a tendency? That's like putting an alcoholic in charge of the liquor store.

Those who struggle with same-sex attraction have my utmost compassion. The longing and desire of the human heart shows we were built for relationship. But if God has condemned finding fulfillment for that need by seeking same-sex relationships, then I believe we as Catholics should put every effort possible to guard ourselves and encourage others to pursue Him wholeheartedly.