What I Love About Catholicism: The Uncool Factor 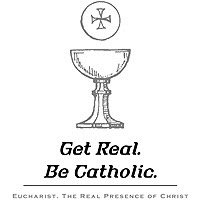 This may sound a little puzzling to some, but I love how Catholicism is uncool in an American society that worships at the Altar of Hipness. Christian Contemporary Music? (CCM) It's been around for decades but just recently have Catholic musicians gathered together to see what they produce. (i.e. Crispin, "Funky Music Fo' Yo' Soul") Catchy, Catholic tee-shirts and logos? Again, there are a few but not many.

All the trimmings of Christian Cool have seemingly passed over most Catholic churches. I believe part of the reason is the Catholic mindset. Catholics are raised with a very specific "code." They understand each other but do not have the same perspective on evangelism as other Christian churches. It's not that Catholics don't believe in evangelism. They do. They're called missionaries and live in other countries. But evangelize our neighbors and ask them to join us at Mass? That's something that many American Catholics don't think about.

I know what other Christian churches are trying to do. In order to reach the world, they adopt the never-ending quest to be trendy and hip in creating memorable catch-phrases (a tee-shirt with a picture of Jesus Christ with the cross on his back saying, "Bench Press This!") or attractive Christian music (Jars of Clay, Poor Old Lu) to draw in the seeker. But in this pursuit, it's easy to get wrapped up in appearing cool. Some even say, "Jesus was cool."

I disagree. Jesus was definitely uncool in His culture. He hung out with the bottom-feeders of the day - tax collectors and prostitutes. He also didn't water down His message in order to be accepted and thought of as being "hip." He certainly was radical and if some think, "Well, radical is cool!" I'd say, "Absolutely. So how radical is it to have an indistinguishable sound from every other heavy metal band out there - except a Christian metal band is screaming words about Jesus?"

Catholic say some pretty radical things. Such as that the Eucharist is really the Body of Christ (not a symbol). They believe the Blessed Virgin Mary continued to be a virgin and was assumed bodily into heaven. They believe the Pope is the successor to St. Peter and is the earthly head of Christ's church. They believe in saying the Rosary and asking dead people (the saints) to make intercession for them before the throne of God. They think relics are pretty special.

Stuff like that isn't cool. In fact, many think it's downright creepy or weird.

But Catholics just sail on, oblivious to what others think. Their devotion grounds them and serves as a reminder that maybe being uncool is actually a good thing.

Hi, my name is Angela and I am a Catholic geek!

Can anyone say Second Chapter of Acts? Loved their music, was heartbroken a couple years ago to learn that Annie, Nellie and Matt were ... ex-Catholics. May they come HOME soon!

Laura, my gosh, YES! I loved them too and had no clue they were ex-Catholics. Believe me, I met quite a few "ex-ers" in the Vineyard Christian Fellowship. I agree with your prayer. Bring 'em home, Lord!