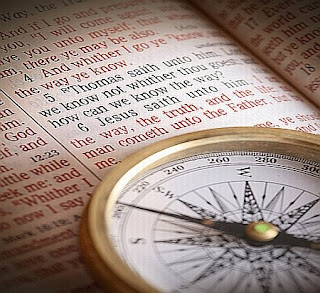 I've been thinking about this topic for some time. In fact, it was part of the reason why I left the Catholic church when I was twenty years old.

For most Catholics, the idea of gathering in someone's home to study the Bible is almost foreign. Catholics are filled with doctrine and Scripture from the time they are children until they finish high school. From there, parish involvement and retreats continue to fill one's spiritual needs.

I used to think that Catholics really missed the mark on this one. As I attended my first Bible study when I was in college, I was struck by how my fellow believers hungered for the richness of God's Word and how they pursued understanding. They rightly treated the Bible as a vast repository of spiritual treasures. I dug right in alongside them, buying concordances, expository dictionaries, and commentaries. I wanted to know the Hebrew and Greek meaning of the words. I searched for other uses of a particular word in the Bible to get a fuller meaning of the context. I eventually led Bible studies and taught people how to dig deep into the Bible on their own.

Although I learned much and God in His infinite wisdom granted me a portion of understanding and practical application of His truth, I had moments where I felt something was missing. I wasn't sure what it was, only that I sensed something was lacking.

It wasn't until I returned to the Catholic church that I realized what might be the missing piece of the puzzle.

Dr. Scott Hahn explained in his journey toward Catholicism (Rome, Sweet Home) that the conversion process started when he realized there was no Scriptural basis for sola scriptura, that Scripture alone is the final authority of Christian doctrine. The verse that opened Dr. Hahn's eyes was from 1 Timothy 3:

I am writing these things to you, hoping to come to you before long; but in case I am delayed, {I write} so that you will know how one ought to conduct himself in the household of God, which is the church of the living God, the pillar and support of the truth. By common confession, great is the mystery of godliness: He who was revealed in the flesh, Was vindicated in the Spirit, Seen by angels, Proclaimed among the nations, Believed on in the world, Taken up in glory. - (1 Tim. 3:14-16)

When Dr. Hahn saw the church was defined as the pillar and support of truth, he realized the Scripture at that time was not in the form we have today. The newly-born Church was to work in conjunction with the commands of God and teachings of Jesus Christ to spiritually mature a believer. The two were considered inseparable.

The only church I know that takes such a responsibility seriously is the Roman Catholic church. Catholicism not only studies Scripture within the Mass, there are approved authoritative teachings from the Church that further illuminates Scriptural truth. It is a dependable support and consistent.

Consistency is often lacking from many non-Catholic churches, especially those which have no government. The Bible studies are approached with "no net," as it were. Everyone's interpretation is considered but there is no final authoritative word from leadership. Often, this leaves the church wide open for heresy and inaccurate applications of Scripture.

We Catholics have something quite amazing. We have a church that takes the study of Scripture so seriously that Bibles and Bible study materials must receive approval from the Bishops. I bought Dr. Hahn's study of the Gospel of John. Right on the same page as the publication's ISBN information is the phrase: Published with ecclesiastical approval. Plus, there are three imprimaturs - one for the original RSV Bible text, another for the Second Catholic Edition, and a third for the introduction, commentaries, and notes.

In other words, this Bible study had to jump through lots of hoops within the Catholic church before getting approved.

Not only that, there is a lengthy introduction to the study which includes a section titled "Criteria for Biblical Interpretation." The Catechism of the Catholic Church is quoted several times, notably CCC113: We must read the Scripture within the "living tradition of the Church."

Catholics have the opportunity to attend Mass daily. Christians of other faiths may have a Wednesday night service and one Bible study during the week, but Catholics have the privilege of hearing God's word from an ordained priest every day during the week. When you're getting spiritually fed like that, it's hard to feel as though something is missing from your life!

I'm just starting to get involved again with personal Bible study, but I realize that Catholics have a fuller, richer spiritual experience by attending Mass. I just didn't realize all this when I was twenty and searching for "something more." The "something more" was right before my eyes all along.
by Mary Rose at 8:56 AM

Email ThisBlogThis!Share to TwitterShare to FacebookShare to Pinterest
Labels: Spiritual Musings, What I Love About Catholicism