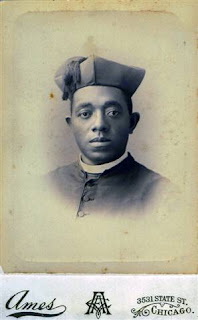 A part of me is still shaking her head in disbelief that I am having such thoughts. Only those who were fully involved with Evangelical/Non-denominational churches will understand what I'm saying.

For 25 years, I attended churches that did not have a clear hierarchy. Senior pastors obtained their roles by either having a vision to build a church (and built it from the ground up), succeeded another pastor by serving within the church and in essence being "promoted" to the senior position, or they were hired from the outside by some steering committee. (Which opens up a whole other discussion in itself.)

The Roman Catholic church is quite different. Men discern a calling from God to enter into a lifetime of service to the Church. It is a mysterious thing, a powerful thing, and a humbling thing - all rolled into one.

When I was involved in the non-Catholic churches, I developed a mild case of apathy toward priests, mixed with just a tad of doubt. (And okay, maybe some condescension.) I looked at the whole idea of the priesthood as passe, un-Scriptural, and a holdover from the Dark Ages. I thought priests (now don't hit me) were elitist; exercising spiritual authority that in reality was available to every Christian.

In fact, a few years ago, I could have had a great conversation with Elena Curti, who is the Deputy Editor of The Tablet, a British weekly Catholic paper. When she recently heard Cardinal Dario Castrillon Hoyos announce that Pope Benedict XVI wanted to introduce the "Gregorian Rite" (also known as the Tridentine Rite) to every Western church, Ms. Curti was slightly horrified. Her response (emphasis mine):

Your Eminence, I think many Catholics are rather confused by this new emphasis on the Tridentine Rite, mainly because we were taught that the new Rite represented real progress, and many of us who have grown up with it see it as real progress, that there are Eucharistic ministers, women on the sanctuary, that we are all priests, prophets and kings. This new emphasis to many of us seems to deny that.

From the article "Traditional Mass for 'all the parishes'" by Damian Thompson, The Telegraph, June 15, 2008

I understand. In fact, Ms. Curti's description of the laity is almost identical to that of Evangelical churches. For years, I felt I was a part of "the priesthood." I felt as though we were all one body, with no real distinction between leadership and congregation. In fact, some churches emphasized "servant leadership" so much that there wasn't much deference given to leadership. Some would say they just got stuck with the job of doing the work. (Sad, but true.)

Catholics view priests much differently. I'm reading George Weigel's book, The Courage to be Catholic: Crisis, Reform and the Future of the Church. Whenever I read Weigel, I am confronted with what Catholicism is; which is many things but one that it is not is a denomination. It is not "an institution whose form is typically defined by the will of its members - but a Church - a community whose basic structure and boundaries are defined, once and for all, by the will of Christ. For the Church is the Body of Christ, and those who are ordained to act in persona Christi, "in the person of Christ," exercise headship in the Body, the Church." (p. 26)

"...ordained priests are "living instruments of Christ the eternal priest." At his ordination, every priest "assumes the person of Christ." The Catholic priest, in other words, is not simply a religious functionary, a man licensed to do certain kinds of ecclesiastical business. A Catholic priest is an icon, a living re-presentation, of the eternal priesthood of Jesus Christ. He makes Christ present in the Church in a singular way, by acting in persona Christi, "in the person of Christ," at the altar and in administering the sacraments."

The Courage to be Catholic: Crisis, Reform and the Future of the Church, George Weigel, p 23

As the lines blurred between the priesthood and the laity, it eroded the understanding that the priesthood is unique and set apart. The respect and reverence that used to be accorded to such men was lost. Could this have been a factor in the sexual abuse scandals of some priests? Perhaps. If a priest was not fully aware of his role as an icon of Christ, then I would think it made it easier to see himself as an individual with no connection or responsibility to the church at large.

In spite of this, I have begun to love priests more and more, especially the younger ones. I know of the earnest devotion that is often the earmark of young adults. It is natural. When one is younger, they are thankfully free of the emotional baggage that often comes in time with years of service. They are hopeful and optimistic. They are to be held in prayer as God sets them upon firmer footing, for their faith will begin to strengthen as they witness God delivering them time and time again from evil.

They have made sacrifices that I can't begin to know. They seek to serve in a culture that no longer acknowledges their role and all too often, denigrates them for it. I believe those who are called into the priesthood during this time will be required to step up to the plate in a more substantial way than their twentieth-century predecessors.

But still, priests are with us and they've been given spiritual authority from God to do the job of leading His Church by submitting to the Head, who is Christ Jesus.

Email ThisBlogThis!Share to TwitterShare to FacebookShare to Pinterest
Labels: George Weigel, What I Love About Catholicism

I love our priests and regularly pray for them.

Great post! What most people who are infatuated with "the spirit of Vatican II" don't realize is that Vatican II, specifically Lumen gentium, clearly delineates between the common priesthood of the Faithful (laity) and the very particular gifts, responsibility and AUTHORITY of the ordained priesthood.

I'm glad to hear more and more are actually preaching this distinction, now. I hope more of the Faithful GET IT soon.

Laura, this has been a very surprising road for me but yet I cannot help but realize there is a very real distinction between priesthood and laity.

I think something is afoot within the Catholic church right now. I'm not sure what, but it seems that Pope Benedict's desire to see more "Gregorian Rite" Masses happen will be a part of it.