The Brilliant Ploy of Sarah Palin

Long ago, a visiting pastor to our church shared the story from his previous career as a landscape artist. A client hired him to design their large backyard. However, there was a problem. The client wanted a serene garden in a certain spot, but no matter how much they tried to change it, the earth was always too mushy from water. Nothing could seem to fill it and make the area more stable. This client had run through a list of some of the more successful landscape companies in town before finally calling the landscape artist/pastor.

The landscaper's solution? Create a showpiece from something undesirable by making it the main attraction. He installed a small pond in that exact spot, filled it with koi fish, and surrounded it with a very serene Japanese garden. The client was dutifully wowed and the landscape artist's popularity boomed in his town, quickly earning him the reputation for being able to take a sow's ear and effectively create a silk purse.

This is what Sarah Palin did tonight.

She took all the criticism of her as a "small town girl" and turned it into her greatest strength. Barack Obama is promising change. But here is a woman who gladly embraces the fact she isn't a "Washington insider" and has let everyone know she isn't afraid to take on the status quo - especially when it comes to corrupt officials. Sarah took the mud slung at her and created an earthy, warm, funny, and smart image that was immediately embraced by the Republicans at the convention. 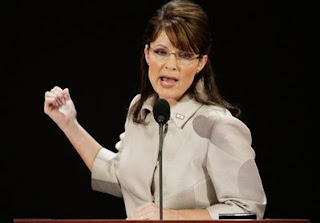 Palin going in for the punch during
the Republican National Convention.
(AP Photo)
Simply brilliant.

She pointed out that those who are often mocked - those in "Middle America" or otherwise known as "fly-over country" - are the very same people working hard to make America both prosperous and safe. It was a very smart speech and gave the country a good look at a woman who wasn't afraid to be called an outsider. In fact, she is counting it as one of her greatest strengths.

Congratulations, Sarah Palin. Tonight, you nailed it.
by Mary Rose at 11:20 PM

I thought she did well and hit just the right notes. My eyes teared up when she introduced her son who is going to the Middle East next week. I teared up when I saw her little baby, her pregnant daughter, the littlest girl patting down her little brother's hair with a bit of spit on her palm - this is a real family.

Yes! Angela, wasn't that too cute when her youngest daughter licked her hand to smooth down Trig's hair? You're exactly right. It is a real family and I believe it will resonate with many Americans. That Sarah is about as real as you can get.

What a breath of fresh air!

And neither one of you mentioned what a handsome fellow her hubby is! I'm so proud of you both! LOL

Okay - seriously - it was a fantastic speech. It was warm, direct, funny, smart...

I'm actually going to break my former vow. I more than once have sworn that I would never put up tacky election signs in my yard. Well, guess what? I'm calling the local GOP office for signs, later today.

Yes. A genuine family. With real issues and real things to deal. With real faith in the Lord Jesus and real kids.

Finally. This is going to be good.