Seven Years Ago Today: Remembrance of 9/11 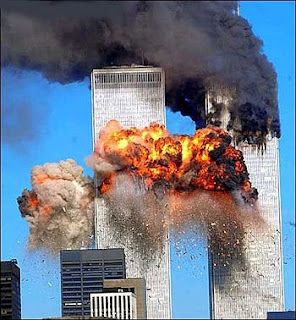 I am sure like everyone else, you remember where you were when you heard about the terrorist attack on 9/11.

I remember this period of time clearly because it was when I was falling in love with my soon-to-be husband. Mickey had not yet asked me to marry him, but it was clear our relationship was getting serious quickly. We had met online at the end of July 2001 in a Christian chat room - of all places. I certainly wasn't expecting to meet anyone significant in a chat room, but there he was, handsome and full of politeness for everyone. I privately messaged him to ask if he was as serious as his photo seemed to be and he quickly typed, "Some people wonder if I'm ever serious!" It was the start of a beautiful relationship. His personality was revealed to be warm, funny, playful, and as I soon discovered - extremely intelligent. In addition, he had devastatingly gorgeous eyes, lips, and cheekbones. (What can I say? I appreciate good bone structure.) Yes, I was smitten.

So on that sunny Tuesday, I went to work like most people. At the time, I was working part-time at an in-house print shop for an annuity company. We had a company meeting that morning. After it was finished, I saw some of the executives huddle together in the front, one talking animatedly. I figured it was industry talk. Then they announced what had happened in New York City. I remember feeling fuzzy, as though I was having a bad dream. We quickly dispersed to our departments. One woman had a small TV in her work area and we huddled around it. I was stunned to see the footage of not just one, but two planes run straight into the Twin Towers.

My fuzziness evaporated and turned into a mixture of rage, fear, and a deep sorrow for the lives lost. During lunchtime, I dialed Mickey's phone number. I was grateful to reach him. He was the first person I wanted to connect with about the event. We quickly said how we couldn't believe what was happening and just was relieved to have each other. We prayed for the survivors, the families who lost their loved ones, and the first responders.

I then called everyone else I knew throughout the day to tell them I loved them. My parents, brother, friends. I felt alone and in shock that something of this magnitude could happen.

I may add more thoughts throughout the day. For now, I'll say some prayers for those who have lost loved ones and those who are still dealing with what happened on that fateful day.

Here's a video I found. It's long, but it's also very raw in its footage. Videotaped by the NYC Fire Department. Never forget...

Email ThisBlogThis!Share to TwitterShare to FacebookShare to Pinterest
Labels: 9/11

May their souls rest in peace. Amen And may we never become complacent.

My small tribute is here