I Did Not Know This: Robert Bork Became Catholic! 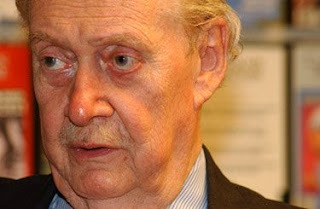 Holy cow! I can't tell you how excited I was to read about Robert Bork's conversion to Catholicism five years ago. I just happened to visit The Catholic Thing and found this article about it.

My heart literally leaped for joy when I read it. Robert Bork's book, Slouching Towards Gomorrah: Modern Liberalism and American Decline, has been one of the most thought-provoking books on the roots of liberalism in our country. Robert Bork has a brilliant mind and I always mourned the loss of his presence on the Supreme Court. Until now.

After reading Austin Ruse's excellent piece on the conversion story of Robert Bork, I was happy to agree with him. God always is working with a much larger picture than our human minds can comprehend. What we take as a disappointment, God uses as a stepping stone toward something much greater than we can imagine. Such was the case of Robert Bork. Although he would probably have made a fantastic Supreme Court judge - at what cost would it have been to his eternal soul? We will never know. But we do know that God has everything under control and guides our lives with His loving hand. Everything has a purpose and God uses everything to bring us closer to Him. Congress may have rejected Bork but God had already accepted him if Robert Bork responded to His call.

Perhaps it was the disappointment of not being accepted for the Supreme Court that sent Robert Bork into a quiet place, asking deeper questions about life. He was an atheist then and now is Catholic. I'm sure it was a challenging road for him, but one he made with the prayers and blessings of many, including his wife (who had been a nun for 15 years).

I am always thrilled when I read of bright minds coming into the Catholic church. They have wrestled with the larger philosophical questions of man and God and found that God indeed has given His truth to the Catholic Church. Through the tradition of the church and His Word, He has preserved us. An intellectual should love to think about God above all else but many times, it's the opposite. Intellectuals often like to think of themselves "beyond" God. With the power of their mind guiding them, they feel confident there is no need for a god.

The greater the intellectual who bows before God, the greater God's glory shines into the world. When an intellectual humbles himself before God and admits he doesn't have the answers and is a sinner who truly needs to be saved - a beautiful witness to the frailty of mankind and our constant need for God's saving grace is released. Intellectuals often illuminate the path for others as people say, "What has he seen in the Catholic church that I haven't?"

Glory be to God Almighty for bringing such people into His Kingdom! The feast table at the Marriage of the Lamb is large, and we are all invited.
by Mary Rose at 7:29 AM

Oh, that is very exciting!!!! I was so excited when Tony Blair converted too!!!!

I don't think Tony Blair is on the same level as Mr. Bork. I would venture to say he (Mr. Blair) might be a "cafeteria catholic."

Well, let's pray that Tony Blair's conversion becomes as complete as Robert Bork's apparently is. The stirrings of the Holy Spirit don't stop, after all, until WE do.

God is good...all the time.