Catholicism and the Trap of Social Justice 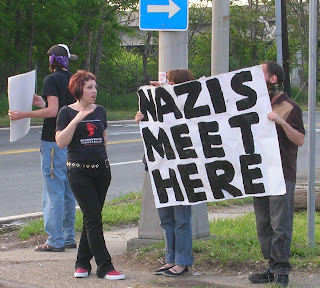 I bet if I gave some of you three chances to guess what the homily today was about at St. My Way, you'd nail it on the first try.

Today, we heard a reading from Ezekiel and how he was appointed a watchman for Israel, alert to any occasion where Israel slipped into sin. Ezekiel was commanded by God to warn them. It is an amazing command in that God always warns His people before judgement comes. He gives man the opportunity to repent, for God's wrath can be turned by a humble and contrite heart.

This portion of the Old Testament is often used to show the role of prophets in society, which is what the priest did today. He said how churches have to be careful with politics because they can lose their non-profit status if they promote one candidate or party over another. However, he quipped, "We can maintain our non-profit status but be non-prophet to our society." That got a round of applause.

I don't want to give the impression that I don't care about social justice. I know we as God's people are called to "defend the poor and fatherless: do justice to the afflicted and needy." (Ps. 82:3) The Church is to extend herself to a hurt and dying world. However, I do believe there is a proper order to things. I see many Catholics falling into the trap of placing a pursuit of social justice above all else.

There were two other readings today - one from Romans, talking about loving one another and the Gospel from St. Matthew, where Jesus emphasizes how important it is to confront sin in our brother. It would have been great to have heard how we can walk out the truth of those readings in our everyday life. But instead, the emphasis was placed on social justice.

Why is it that some Baby Boomers are so stuck on this concept? I was just talking about this last night with my husband. "Isn't it interesting, " I said, "That those who came of age in the sixties were usually protesting something. It was always a battle for them, whether it was Vietnam, women's rights. or abortion. It's always about the fight. Could it be that they know no other way of existing? That they don't know how to be at peace?"

I know not all Boomers are stuck. But it seems that the more liberal Catholic churches are filled with such people. It's always about changing something, sometimes just for the sake of change. But I think they're missing a very important point.

God did not send Jesus Christ into the world to balance social justice. He sent Him to pay the price for man's sin so that man could enter into relationship with his Creator. Sin is the problem and Jesus Christ the solution. It can't get any more clearer than that. What a poor person needs first is the message of salvation. Sure, give him a bowl of soup, but be sure to tell him God loved him enough to break through this hard shell of a world in order to reach him.

What struck me is that God is just, and demanded justice for the sin of Adam. But within justice is obedience. In the Kingdom of God, justice cannot happen without obedience. Jesus Christ obeyed His heavenly Father, even unto death. So did many saints. Obedience to God was the first priority in their lives - not in leveling the social playing field.

What happens when we obey God? What occurs when we engage society first in their need for a Savior? Radical evangelism. When Christians are not afraid to speak to others about Jesus Christ, then social change will occur naturally. Once a non-believer is persuaded through the power of the Holy Spirit to repent and ask God for forgiveness, do you think he may be prompted to treat his fellow man a little better? A little more kindly? Would he not have more compassion?

One of my pastors from a non-denominational church told our congregation that many people came to him, complaining that they were depressed. His solution: volunteer. Give of yourself to others. As he explained, "It is hard to focus on our own problems when we're focused on someone else's." When we seek first His Kingdom and His righteousness, we will be given all the tools necessary to serve society. But we must go to Him first, not some political action committee that keeps bringing up water from a dry well.

From all my years involved in ministry, I can vouch for the fact that many of the most successful outreaches are done by Christians who have their houses in order. They seek to share the Good News with everyone they meet. In doing so, they are given many opportunities to serve.

Society needs such committed believers more than ever.
by Mary Rose at 4:50 PM

Spot on, young lady!! The Church has one job. Simply put - to get us to heaven (teach, lead, sanctify).

Any social justice should flow from the laity who, as you said, had their own house in order.

Thank you, Adrienne. Flow is key. I also believe it comes as a natural progression from the "teach, lead, and sanctify" focus.

I know serving others is important, but I think I've heard more of a strident, condemning voice from those who think they should "speak out" and little love. That just sets my teeth on edge...

I got a craw full of social justice when I was a Quaker. Catholics forget that our Faith is like a TRIPOD - Social Justice (i.e., living out the Works of Mercy) is only one of those legs; another is the Mystical (which includes the prayer life, devotions, etc.) - and our sadly-neglected foundational aspect: the Juridicial.

Most Catholics are appallingly ignorant or defiant of Church teaching on the various controversies being fought over by the "socially-just" minded; consequently, we have people who are fighting the wrong battles, for the wrong side.

Laura, your journey toward Catholicism is fascinating. I've always had a respect for the Quakers.

As I've mentioned, it's not that I don't believe there is a time and place for speaking out and pursuing social justice (for instance, where would our society be without those who labor so tirelessly to protest abortion and spend time praying outside the clinics?). I'm not sure if I made it clear, but I was speaking about the more liberal Catholic churches who want to focus on the "social justice" of ordaining women while neglecting the fact we're also to share the Good News with others. It seems that all their energy is spent on furthering their own will.

I believe in a "blend" but admit it's not easy to achieve. Usually our passions carry us to focus on one aspect of our faith to the exclusion of other facets. Volunteering, for instance, may not be on the menu for many Catholics.

I wouldn't mind hearing more about what we as Catholics can do regarding say, stem-cell research. And since Pope Benedict has encouraged us to not remain silent about our faith and the public square, I certainly don't want to do that. So I'm still figuring out how to walk this thing. My non-denominational church was actually very absent on social issues.

To tell you the truth, I think what concerns me is the image I have of those concerned with social justice. Sadly, I've seen more liberal folks involved, complete with the rage, the sense of entitlement, and the bullying. That type of behavior absolutely irritates the heck out of me.

I think I just may need better role models. :-)