A Cornucopia of Book Recommendations! 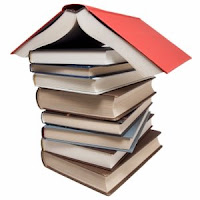 During Fr. Zuhlsdorf's visit yesterday, I suggested that a great addition to his blog would be a "Must Read" section for converts and reverts. There are so many books available on Catholic apologetics and spiritual formation that it is quite easy to become overwhelmed!

After my return to the Catholic church four months ago, my home has been filled with various books on Catholicism and living the faith. I am a huge bookworm, so devouring books is nothing new. But I had no idea there would be so many!

So, Fr. Z posted a request for book recommendations on his blog and wow - did his readers deliver.

This entry will most likely be updated. I'll post a permanent link to it on the sidebar. Please note, some of these books are obscure or no longer in print. I wasn't able to thoroughly check each one, but tried to find the author where none was originally listed. I first checked with Amazon although anyone could "Google" a title to discover its availability.

Question and Answer Catholic Catechism - Fr. John Hardon
Catechism of the Council of Trent
by Mary Rose at 10:43 AM

First let me apologize for leaving a comment that has nothing to do with your post, Mary Rose...
But I was just browsing the gallery at DST and I saw your Virgin Mary ATC and it clicked that I knew you from somewhere else!!! :D
I recognized your username (it IS pretty unique....) and I remember your picture there now too. It all makes sense... :D
I am "natesabel" on DST...my gallery is somewhat neglected as of late though. ;D

Chris, how very cool! I remember when I discovered your blog and thought it was pretty nifty to discover another Catholic digi scrapper!

I go through ups and downs with my own creations. I just finished a small "wave" of creativity with a few new layouts. I want to do so much more. Hopefully my husband and I will be in new digs within a few weeks and I'm looking forward to having more "space" for creativity.

I'm going to check out your gallery and as they say, "leave you some love." :-D

Thanks for letting me know!

P.S. Someday I need to change my screen name at DST. I'm finally closing down my website of the same name because I've not done anything with it in years...

I just wanted to thank you for compiling this list from all the posts on the other blog. As someone who is still in the process of converting, and a bit of a bookworm, I'm always looking for good books to read to help me educate myself about the church.

And also, I love your blog. I particularly enjoy the "What I Love About Catholicism" posts.

So again, thank you.

Amber, you are most welcome. And welcome home! I pray that you find as much and more to appreciate about our Catholic faith as I have. Many blessings upon your journey. Thanks for the kind comments and your input. :-)