What I Love About Catholicism: Organized Religion 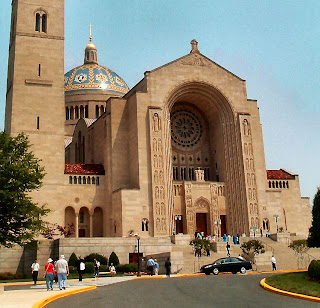 The Basilica of the National Shrine of the Immaculate Conception, Washington, D.C.


There was a time when I would quickly define myself as a "Christian" but not religious. By that, I meant that Christ came not to establish a religion but a relationship. I held anything religious in disdain, believing it Pharisaical or void of meaning - behavior and attitudes propelled more by guilt than anything.

How the years can change one's opinion.

I can relate with many young students aversion toward organized religion. To them it seems oppressive and resistant to honest questions. The "do as you're told just because" argument doesn't fly with them, nor should it. Catholics can be rigorously intellectual and still remain faithful to the Church. In fact, most of the Catholics I've been meeting lately have been exactly that - highly intelligent men and women who take seriously their journey of faith.

I think organized religion has been unfairly judged and found wanting. Certainly there are the overbearing religious leaders who really aren't leaders. There are misguided and selfish people in every area of life - not just religion. But with religion, it would seem that a person applies what I call the "one burnt cookie" approach. If this type of person has "one burnt cookie," they swear off cookies altogether. There is no mercy given, no charity found. They've made a blanket decision that since their personal experience was a negative one, then all organized religion must be negative. And of all places, they refer to televangelism to justify their opinion.

I've been on the other side of what I now refer to as "un-organized religion." (Otherwise known as non-denominational churches.) And you know what? It can have just as many annoyances: a revolving door of pastors and constant chaos masquerading as change per "The Holy Spirit," to name a few. But I can't criticize them too much. For so many years, I thrived on the constant change, wanting the "new" more and more. However, although I did like the change when I was younger, as I began to age, I started to get frustrated.

Was the "change" truly a move of God, or the results of a fickle pastor? How fair was it to fire the youth director because his wife had the nerve to tell one of the pastor's kids she couldn't continually show up late for drama practice and disrupt the group with her chattering? How wise was it to scrap weeks of preparation for a major conference registration process because the associate pastor wanted to do it differently? How considerate was it for the senior pastor to decide he wanted an entire warehouse moved in one weekend and only gave a few days notice to everyone?

And some wonder why I have so much gray hair...

Perhaps organized religion was a natural progression for me. The Myers-Briggs Personality Indicator pegged me as an ENTJ. I actually fell in the middle between being an extrovert and introvert. But I was off the chart as a "J" - which stands for "Judging." The other end of the spectrum was "Perceiving." The "J's" like order. Lists. Closure. The "P's", on the other hand, like to keep their options open. They like change. They're the ones who will hop in a car and say, "Hey, let's just drive around and see where the road takes us!" Meanwhile, the "J" is running around, grabbing maps from Google, lists of possible restaurants within a 50 mile radius and making sure the cell phones are powered up.

I can't explain how good it feels to be back in an "organized religion." I relish it. I think that most people would admit there is value in order. Nature shows us order and ritual within the cycles of the seasons. There is a beginning and an end. I believe God knew we would need security by having these rituals repeat themselves over and over. Order brings with it calm and grounding. Ask any foster child what they want more than anything and you'll hear an answer that runs along the same lines. They want a stable environment.

Catholicism offers one of the most stable environments around. Although there many be those who don't completely agree with the Pope, they still attend Mass. They still receive the sacraments. They still celebrate the holy days.

I'm also wondering if ritual is for older adults. I'll be mulling that one over more, but it would seem that most youth cannot appreciate ritual. It bores them. Perhaps they look at the older people in attendance and think of resignation. I know I didn't feel resigned at all as a youth, but full of bustling energy that I channeled into my spiritual quest.

There is a quiet energy within organized religion, if one pays attention. It requires an intentional concentration on what is happening around you. Only by awareness will ritual avoid becoming rote. And right now, I am noticing that organized religion can be a good thing. A very good thing, indeed.
by Mary Rose at 8:29 AM

I completely agree with this post! I too am an off-the-charts J, and organized religion (especially a religion like Catholicism, with all its intricate rules and answers to every "what if?" is so comforting!

One thing, though - I don't think that ritual is necessarily lost on the young. Some may reject what they've always known, but I am one of many that, with some tweaking (I converted from all kinds of Protestantism), embrace religion and ritual wholeheartedly.

I recommend reading "The New Faithful: Why Young Adults Are Embracing Christian Orthodoxy" by Colleen Carroll. I received a copy as a Christmas gift from a friend who watched me convert, and I found it so truthful in its portrayal and reasonings of why orthodoxy is becoming so important to the young.

I love your blog! Keep writing.

I've never taken the Myers-Briggs test you refer to, but I suspect I would fall at the same end of the chart as you, a "J". I never do anything without a detailed plan and a few back-up's, just in case something goes wrong. I lack spontenaity in any form. :)

And I suspect that that makes me unusual as a young adult, but, at 26, I have to say that I find the rituals of the church to be, not just comforting, but they fit, to me. I only started investigating Catholicism after attending a very, very "reformed" Mennonite church and feeling as though there was no respect, almost no place for God in their worship. It was like a lecture, and I couldn't figure out how this was worship.

I love, in Catholicism, that I can take any teaching, any aspect of the Mass, anything at all, really, and I can trace it back through history, all the way back to the beginning.