What I Love About Catholicism: Sacred Space 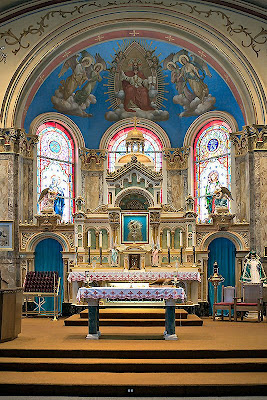 As I was packing away my gazillion books, I came across a unique hand-made volume by a Christian woman who attended the same non-denominational church as me in Charlotte, North Carolina. This book is extremely unique. It is filled with Christian poetry, thought, and "word art" - all examining the question of how our starved souls seek satisfaction. (A little alliteration with my morning coffee...)

This woman is extremely gifted, not only in creating such a book but she is also a musician, and now - has founded a 24/7 prayer center in Charlotte. (I don't think they're quite up to praying 24 hours a day, 7 days a week yet; but it's a goal.) I was happy to see she was still up to her creative adventures.

I thought again about art and faith. It's slightly surprising I haven't talked about this at length yet simply because I am an artist. Art has always held a special meaning for me because it is a part of who I am. I define myself as an artist, although I've not drawn anything in ages. Still, art has been a part of my life ever since I could hold a crayon. I developed my drawing skills throughout junior high and high school, even intending to major in art. My first declared concentration of study was graphic design.

Long story short - I had an older adviser who thought it best to discourage as many students as possible from pursuing art so they wouldn't be "disillusioned" when hit by the "real world." I was one of them. My malleable nineteen-year old ego was not prepared for challenges, and so I made the mistake of believing those who questioned my purpose. I switched majors. God allows such things for a reason and I've benefited in many ways from my degree in Communication Art. However, I find it an endless source of amusement that today I am teaching digital design, which is in essence, graphic design. So my education during those years didn't go to waste, after all, and I'm happy because I'm using the talent God gave me.

During the years when I was involved with non-denominational churches, I was both a member and a leader of a Christian visual artist's group. One of our projects was to install an exhibit at the church, showcasing the group's artwork. We carefully hung paintings and photographs around the lobby area, but nothing was installed in the main sanctuary.

Sanctuary. Catholics have a different understanding of the word. For non-denominational churches, the space they use for worship is not seen as sacred, per se. It is simply an area to gather, a large meeting room, as it were. After the services, the space would usually fill with loud chatter as the churchgoers would greet one another. So although this large space was called a "sanctuary," it didn't hold the same meaning for me as a place for peace and reflection.

Many people appreciated the exhibit and were fascinated with much of the art - especially my co-leader's installation of his own "found objects" work; which consisted of an assortment of objects found in a garbage dump, painted, and arranged so that the entire piece was draped from the outside roof. It was to symbolize how God has taken us all from the garbage heap of life, connected us, and made something beautiful.

What was interesting was the senior pastor's decision to only allow the exhibit to remain for a few weeks. He didn't want any of the art inside the sanctuary, preferring the simple, bland white walls with a few international banners hung from the rafters. He didn't understand how much we crave sacred art and to be honest, neither did I.

Not until I read about the 24/7 prayer Center did I realize how the Catholic church has always known of the need for sacred space and sacred art. When I read of how visitors wept when they went through the prayer center, I understood. They were weeping because a part of their soul which had been crying out for a sacred expression of man's yearning for God - was heard. They wept because within a non-Catholic church, the role of art is given very little recognition.

Non-Catholic churches have a myriad of ways they try to bring art within its chambers. It is no small feat to have a church allow such an exhibit as we had, let alone bless a group for trying. But Catholic churches do not need to wrestle with the question of whether art is "appropriate" or not. We already have artists within our faith-filled lineage that have produced some of the world's greatest masterpieces. Michelangelo, Donatello, Botticelli, and Raphael were just a few of the brilliant artists who brought the Biblical narrative to life. When we gaze upon these great works of art, we are reminded of who God is and His unceasing love for mankind. And if we really ponder it deeply, the understandable response is weeping.

It occurred to me that for many who seek a connection with God apart from entering a Catholic cathedral - only have modern art. Modern art has its moments, but in my opinion, it can't hold a candle to the immense beauty of ancient art. Especially for young people, art is a powerful conveyor of both our desire for God and His desire for us. God has given man the ability to create and that ability, when offered back to Him, can transform him. It shines a light upon all the dark places and when offered as a sacrifice; purifies and elevates us to a place we know that only through the grace of God, we may reside.

As I knelt this morning during Mass in my parish, surrounded by stained glass windows and confronted with a magnificent altar, my thoughts were drawn toward a Holy God who sacrificed His only Son so that we may be saved. I was reminded of how many saints had murmured the same prayers, reciting words that humble and beseech our Heavenly Father for His mercy. I was reminded of God's extraordinary grace for struggling mankind.

This is what sacred space means for me. It is a place to be reminded that we will always, always need God's mercy and that God, in His infinite love, will give it.
by Mary Rose at 2:54 PM

Email ThisBlogThis!Share to TwitterShare to FacebookShare to Pinterest
Labels: Art, What I Love About Catholicism

oh my, is that the *sanctuary* of your church? It is absolutely gorgeous!!!

Chris, heheh...no, not my parish. Yes, it is quite gorgeous, though, isn't it? I love the blues.

The photo in my header is of my parish's altar. My parish has a beautiful altar, also, and lovely stained glass windows.

Someday I hope to take some really great photos of the interior. You can believe they'll end up in a layout!