What I Love About Catholicism: Saints 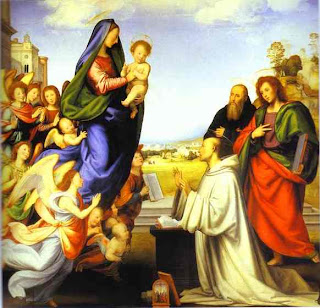 Today, we celebrate the Feast Day of St. Bernard of Clairvaux Abbot, Doctor of the Church — 1153

When Bernard finished his schooling at nineteen or thereabouts, he had, in addition to the advantages of noble birth and natural talent, the sweetness of temper, wit, and personal charm that make for popularity. Subject to strong temptations of the flesh, he often considered giving up the world, and even forsaking the study of literature, which was one of his greatest pleasures. He felt attracted to the Benedictine monastery at Citeaux,[1] founded fifteen years before by Robert of Molesme, Alberic, and Stephen Harding. One day Bernard knelt in prayer in a wayside church, to ask God's guidance as to his future. On arising all doubt had vanished and he was resolved to follow the strict Cistercian way of life. His uncle, Gaudry, a valiant fighting man, and Bernard's younger brothers, Bartholomew and Andrew, declared they would accompany him, and an appeal was made to their eldest brother, Guy. He, however, had a wife and two children; but when his wife soon after entered a convent, he also joined them. Gerard, another brother, was a soldier, engrossed in his calling; still, after being wounded and taken prisoner, he also heard God's call, and on his release followed the others. Hugh of Macon was also won over, and others who had previously given no thought to the religious life. Such was Bernard's eloquence that within a few weeks he had succeeded in persuading thirty-one Burgundian nobles to go with him to Citeaux. Bernard and his brothers gathered to bid their father farewell and ask his blessing. Only one son was left behind, Nivard, the youngest, and as the party rode away, Guy called to him, "Farewell, little Nivard! You will have all our lands and estates for yourself." "Oh," answered the boy, "then you are taking Heaven and leaving me only the earth! The division is too unequal!" Such was the pervasive spiritual atmosphere of this age of faith. (source: EWTN)

It has taken me some time to embrace the saints of old. One of the earlier lessons I learned from my non-Catholic churches was that Catholics "worshiped Mary and the saints" and this was not Biblical.

Because I had little instruction on how to defend my Catholic faith, I surrendered it. The Bible said that Jesus Christ was the mediator between God and man, so why would we need anyone else? I didn't realize how to distinguish Jesus' role as Redeemer from a saint's intercessory role. It still is taking me some time to absorb this, but I think I'm finally getting it.

Because of Adam's sin, man was separated from God. Throughout the Old Testament, God patiently led His chosen people, Israel, to a carefully prescribed set of laws so that they could repent and make reparation for this sin. As we all know, the Jews had a difficult time keeping the Law. They would fail time after time; and then a godly leader would arise, leading them back to their Adonai.

God, in His infinite mercy, sent His Son, Jesus Christ to do what man would never be capable of doing - redemption. Only Jesus Christ, the perfect Lamb of God, was able to be sacrificed in order to take away the sin of the world.

Saints are men and women who have forsaken the world, took up their cross, and followed Him. They persevered through trials and tribulations, always seeking to glorify God with their heart, mind, and soul. We are all called to be saints.

Now praying to a saint, in my mind, used to mean I was elevating them to the same level of Jesus Christ. Prayer automatically meant worship. But the more I've thought about this, the more I'm beginning to see that prayer is a communication from me, a request or a petition. We are told to make our requests be known to God with confidence, as St. Paul wrote to the Hebrews:

Let us then with confidence draw near to the throne of grace, that we may receive mercy and find grace to help in time of need. (Hebrews 4:16)

I heard an argument for praying to the saints that went like this: do you ever ask for help from a friend? Do you appreciate it when they think of you and send a letter or call you on the phone? Such is our relationship with saints. We are asking for help because God knows we need it. When I pray to a saint, I am not worshiping that saint for worship is only for God. But I am asking for help, knowing that we are a very large family and all in this struggle for holiness together.

One of the benefits of returning the Catholic church has been this new awareness of the saints. In Hebrews, we are told that a great "cloud of witnesses" surround us.

Therefore, since we are surrounded by so great a cloud of witnesses, let us also lay aside every weight, and sin which clings so closely, and let us run with perseverance the race that is set before us, looking to Jesus the pioneer and perfecter of our faith, who for the joy that was set before him endured the cross, despising the shame, and is seated at the right hand of the throne of God. (Hebrews 12:1)

I find it very interesting that right after mentioning we are surrounded by a great cloud of witnesses, we are reminded that it Jesus who is the supreme authority of our faith; not a saint. Can't get any more clearer than that!

Still, we're surrounded by a multitude of witnesses, watching us complete the race, enduring the exercise and overcoming any obstacles toward finishing what we started. We have Jesus Christ, who did finish what He begun when He took the form of man.

Since we are in the midst of the Olympics, what do people do when watching a race? Sit quietly and observe? Of course not. They stand, they cheer, they scream encouragement toward their chosen runner, pressing them on for a victory. When their runner finally crosses that finish line as the winner, they rejoice, savoring that victory almost as much as the one who ran the race.

Our saints know how difficult this life can be. They are encouraging us by their intercession for our needs. In the book of Revelation, we're told that the prayers of the saints fill the bowls brought before the throne of God. (Rev. 5:8, 8:3,4) I will attest to their efficacy. It has been surprising to me how I now truly feel "covered" - a term often used by non-Catholic Christians who covet the intercessory prayers of others. How ironic that after all my years of involvement with intercessory prayer, I now accept the intercession of the heavenly saints.

Intercession doesn't stop at the grave. Thank God for His saints, who continue to petition His throne for our good.
by Mary Rose at 6:45 AM

Email ThisBlogThis!Share to TwitterShare to FacebookShare to Pinterest
Labels: Saints, What I Love About Catholicism

Mary Rose! Your post made it onto a Google alert for Catholic blogs!

I can say 100% of the time that St. Anthony has come through for me. I have only prayed for the Little Flower's intercession twice and I am sure she answered my prayers within 5 hours.

Before I understood words like Real Presence, infallibility, holy day of obligation, and penance I "got" the saints. From the time I was little I have been fascinated by them. I still am!

Very interesting. It's making some sense. I really appreciate your explanations for this Prot who just wants to study and understand things. Thanks.